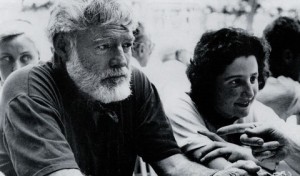 Hemingway often took younger women under his wing and wanted them around. Sometimes it was intellectually stimulating. Sometimes there was an attraction. Sometimes they amused him. Sometimes he just liked them. He had many women as friends: Marlene Dietrich, Slim Hawkes, Ava Gardner, Lauren Bacall.  He was infatuated with many: Adriana Ivancich is of great note.

Valerie Danby-Smith was initially providing secretarial services to Hemingway. She was part of the entourage of his trip to Spain in 1959 and by the end of the trip, Hemingway wanted her to continue on. Was he romantically attracted? Probably. Valerie asserts that he begged her to continue on to Cuba as he needed her with him. She was 19 at the time; he was 59..  I also think he simply liked her cheerful ways and good nature. 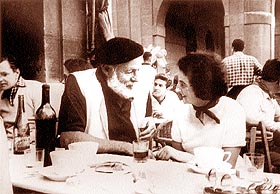 She has written a book about her time with him and is now leading tours in Paris to the old Hemingway haunts. .

Did I mention that she married Hemingway’s son, Gregory? Yes, she did.  They met  through the Hemingway connection and had four children together. and while their marriage ended in divorce, she appears to have maintained a good relationship with Gregory until his death. She wrote “Running with the Bulls” about her time with Hemingway. 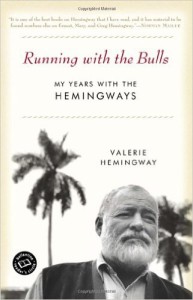