The Rage of Plum Blossoms

Attorney Quinn Jones is in over her head. Her husband, Jordan Chang, Annapolis grad and superstar businessman, has been found dead outside their Greenwich Village brownstone. He’s wearing clothes that aren’t his, and was last seen at a place he never went while consorting with people he shouldn’t—and he’s vastly richer than he ought to be. Since NYPD has labeled Jordan’s death a suicide, Quinn is on her own to uncover the truth. Courtrooms, Quinn knows. Chanel No. 5, horses, frizzy hair, and martial arts, she knows. Murder, she doesn’t know but she’s learning fast in order to stay alive. With a few clues to work with, including a photo of Jordan with a stunning unknown Asian woman and a copy of a 1986 check payable to Jordan for twelve million dollars, Quinn stalks the back streets of Chinatown, haunted by the need to know what happened that day and why. 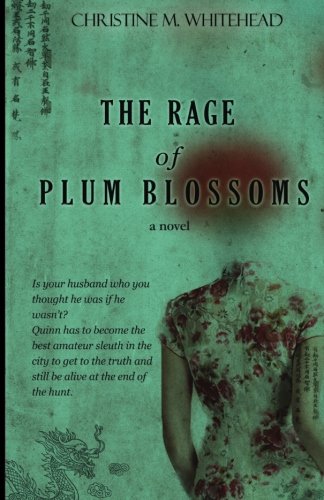 "The Rage of Plum Blossoms A well written mystery and one with a fairly convincing plot. These are things I look for in reading-for-entertainment and find all too rarely. Having said that, I find myself wondering why I found it as entertaining as I did.

I believe it was because I actually liked the characters, in spite of the fact that the circumstances of their lives are very different from mine and not the sort that I desire at this point in my life. It occurs to me that they are people who would have attracted me more when I was younger, when the very fact of being affluent, of a certain kind of life-style which appeared to be ‘sophisticated’, seemed to promise something I very much desired but could not name. I now think that elusive ‘something’ is what they call ‘glamour’.

It was their individual enthusiasms which made them attractive, even though only two of them had a particular enthusiasm with which I could identify (a serious capability in a difficult foreign language). The primary commonality between the protagonist and one major character was a passionate interest in perfumes and gossiping about clothes. Another character was an ex-cop who was passionately interested in the mystery. The mystery brought them all together, but (apart from not even a shadow of financial stress) they had nothing else in common as a group. They liked each other, but the group they formed lacked any kind of ‘political correctness’. The lack of any form of political correctness is a vision of social life that has always been elusive for me, but seems to have disappeared entirely in the past few decades. The contrary vision was actually referred to, in one of its forms, in this book when one of the characters referred to the ‘rule’ of ‘never wearing white after labor day’. My mother’s insistence on that rule has horrified me to this day.

The book held my attention throughout, and only faltered a little when the description of Halloween costumes went on longer than I liked and began to feel just a little too silly. By and large, this is one of the two best mysteries I have read in years."
Good Reading
Cherokee Randolph