“She shot very well this good, this rich bitch, this kindly caretaker and destroyer of his talent. Nonsense. He had destroyed his talent himself. Why should he blame this woman because she kept him well? He had destroyed his talent by not using it, by betrayals of himself and what he believed in, by drinking so much that he blunted the edge of his perceptions, by laziness, by sloth, and by snobbery, by pride and by prejudice, by hook and by crook.” 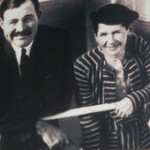 Pauline Pfeiffer was Hem’s second wife. She was petite, lively, chic, and in love. Since equality in a relationship was not his thing, Pauline seemed to know intuitively that she would have to defer an awful lot of the time to his dreams and wishes. That deference came naturally to Hadley, less naturally to Pauline, and not at all to Martha. (More of Martha next week.)

Once Hadley allowed the divorce to take place, Hem seemed less eager to seal the deal with Pauline although he ultimately adjusted and set a date.  He wrote to Isabelle Godolphin that “I’m cockeyed about Pauline and going to get married in May . . . I felt like hell before, but now everything is very very good and everyone is feeling swell.”

Hem even became a Catholic for Pauline, who was a true believer. As for Hadley, she went back to New York temporarily, dated various men (and ultimately married journalist Paul Mowrer), and had a cordial meeting with Max Perkins, Hem’s editor.  Max had arranged for the direct deposit of royalties from The Sun Also Rises to Hadley’s account. She received them for her life.

Pauline and Hem were married on May 10, 1927 in Paris. In fairly short order, Hadley’s bitterness faded and she became quite friendly with Pauline due to their shared interest in Bumby’s welfare, as well as Ernest’s welfare.  Pauline did her best to keep up with Hem, letting him be him, going to Africa, and

finally settling in Key West, a place that Dos Passos drew Hem to, noting its climate, its fishing, and its undiscovered beauty.

Hem needed little more persuading. He and Pauline found a house on Whitehead Street. Jack aka Bumby had a nice relationship with Pauline, who treated him like one of her own boys.  She did in fact have two sons with Hem: Patrick and Gregory.  Hem by all accounts loved all of his sons (although with Gregory known as Gigi, there was estrangement when he was an adult), and they adored Papa. Being with him was enchanting and he had an air of excitement. Hem said that while not partial to kids, he rather liked these three.

As years passed Pauline and Ernest became cooler to each other.  Hem spent time with Jane Mason, wife of Grant Mason, and an affair seems clear. Jane was a flashy, blonde, risk-taker, and not emotionally stable. She later jumped from a balcony. Whether Jane did so purposely or accidentally, is not clear but most believe it was a suicide attempt. Jane survived. Hemingway, per Bernice Kert, author of a wonderful and fascinating book about all of Hemingway’s women (and aptly called The Hemingway Women) avoided emotionally unstable woman.  This seems true as Hadley, Pauline, Martha and Mary were all strong, intelligent, stable women. Even his closest women friends such as Marlene Dietrich were women with good heads on their shoulders.

Kert in her book, page 262, cites a story about Hem and Dietrich meeting.  She notes that on his way back to NY from Paris on the Ile de France, Dietrich recalled, “I entered the dining salon to attend a dinner party.  The men rose to offer me a chair, but I saw at once that I would make the thirteenth at the table. I excused myself on grounds of superstition, when my way was blocked by a large man who said he gladly would be the fourteenth.  The man was Hemingway.”   This is what Pauline was up against.

Ultimately, Hem left Pauline for a younger flashier model: Martha Gellhorn. He doesn’t seem to have had the sentimental look back at Pauline that he had at Hadley although he does praise her spirit in going to Africa with him, even though it meant leaving their sons for a significant period of time.

Pointedly, A Farewell to Armswas is dedicated to Uncle Gus, Pauline’s uncle, not to Pauline.

When he left, a great deal of Hem was left in Key West as he moved on to his next home in Cuba with Martha and on to write one of the greatest novels ever written: For Whom the Bell Tolls.