No, his favorite drink was neither a mojito nor a bloody Mary but a dry, very cold Martini! He also, contrary to other claims, did not invent the Bloody Mary (the claim being that it was named after his fourth wife, Mary), during what was to be the equivalent of a period of drinking celibacy with the claim being that he used the tomato base to disguise the vodka. Good story but not true.

A whole book has been written about authors who drink called The Trip to Echo Springs by Olivia Laing. While we all joke about Hemingway “drank here” and that he drank everywhere, it is clearly a serious topic that has decimated the writing population or enhanced their creativity depending on your point of view. While I usually ask, “Why do writers drink so much,” someone once asked me “Why do drinkers write so much?”

Hemingway drank a lot but it didn’t start out that way.  He drank socially although significantly.  He did not drink while working.  On one occasion when asked by a journalist if he drank while writing his novels and short stories, he said, 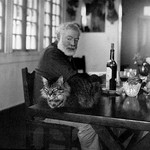 “Jeezus Christ! Have you ever heard of anyone who drank while he worked? You’re thinking of Faulkner. He does sometimes – and I can tell right in the middle of a page when he’s had his first one. Besides, who in hell would mix more than one martini at a time?”

Drinking began early, probably at age 17 and then more drinking while in Italy during the war. Then, once he moved to Paris with Hadley, “the cafes, bars and bal musets became rallying points, look around the table and you might see the brightest minds of the Lost Generation—F. Scott Fitzgerald insanely drunk on champagne, Ezra Pound sipping absinthe, Gertrude Stein enjoying a fine red, James Joyce savoring scotch and Ford Maddox Ford sending back a brandy for the fourth time. They drank up liquor, they drank up life, they drank up each other.” Quote from Hooching with Hemingway by Frank Rich.

Hem was highly critical of Scott Fitzgerald’s drinking in their salad days, claiming it sapped Scott’s creativity, in addition to Zelda doing the same. He was annoyed by Fitzgerald’s alcoholism and occasionally criticized his writing in public. Hem and Zelda hated each other and there was never a détente in those feelings. Hem clearly did not see himself falling deeper into the alcoholic lifestyle as the years passed.

By the time Hem left Paris, his drinking habits had changed.  “Where before he’d been a classic binge drinker, he now kept a steady bottle-killing pace. The transition had taken place just months earlier, after Hadley had lost a trunk containing most of his early work, literally years of labor. Crushed, Hemingway turned to alcohol as a means of drowning his bitter rage—when the anger came, he would slip down to the cafe and drink brandy and carouse with friends until happiness seeped back in. Quote from Hooching with Hemingway by Frank Rich

Hem also had fun with it.  When Jigee Viertel revealed one evening that she had never had a drink of hard liquor, Hem was astounded. When she indicated a desire to try one, he suspended all that he was doing to consider whether Jigee— now in her mid-thirties— should end her tee totaling and if so, what the proper first drink was. Hem thought she should at least try a drink. He ran down options from a Bloody Mary, to a Manhattan to various gimlets. Finally he decided only a Scotch Sour would do.  Jigee broke into a smile at the first sip, and Hem said, “It’s a good omen.”  (A.E. Hotchner Papa Hemingway Page 60-61)

Hem brought his own booze to Spain or had it supplied; he kept it on his boat in great abundance.  While he went through periods of abstinence, it never lasted and it was his pacifier of choice.  My own reading leads me to think that initially, he became gregarious; on his own, he could be quite shy.  I have the impression that once a certain point was passed, he became overly verbose and cantankerous.  There is that thin line between wonderful raconteur and domineering ego-maniac who keeps going to the point of becoming a boor and a bore.. I don’t know if that was so in Hem’s case but I think it is what  happened particularly in the later years.

Sadly, alcoholism did play its role in Hem’s demise and decline. It appears to have ravaged other relatives after him too. Sad to consider other works that Hemingway may have written absent depression and alcoholism.

The below site talks about Hem’s drinking and some specifics.  Interesting article. Check it out.