A MOVEABLE FEAST to become a Movie

WHO WILL PLAY THE LEAD ROLES??

EXCLUSIVE: Ernest Hemingway’s A Moveable Feast is being adapted for the big screen by Elizabeth screenwriter Michael Hirst and actress Mariel Hemingway.

The film version of A Moveable Feast, Ernest Hemingway’s memoir about his time as a young writer in Paris in the 1920s, is edging closer toward production.

A script is now being written by Michael Hirst, the award-winning British writer of Working Title’s Elizabeth and Elizabeth The Golden Age and creator of historical drama series Vikings.

The project is being developed with actress and author Mariel Hemingway, who was Oscar nominated for her role in Woody Allen’s Manhattan and is the granddaughter of Ernest Hemingway.

“I have waited years and years for that to be set up. Mariel Hemingway has set that up for me and I am enjoying it enormously,” Hirst commented of the project.

“It is just the greatest love story ever written – the most painful love story and the most honest,” Hirst observed of Hemingway’s memoir which was published in 1964, three years after its author’s death. “It is a challenge to do but it is such a worthy challenge.”

Hirst was speaking during the London junket for the second season of Vikings, a drama series made for History.

A Moveable Feast, which features Hemingway’s observations of such lauded literary figures as Gretrude Stein, F. Scott Fitzgerland, has provided inspiration and background material for several earlier features, among them Alan Rudolph’s The Moderns and Woody Allen’s Midnight In Paris. 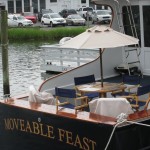