Hem in Rapallo or The Cat in the Rain

Please forgive this reprint from 2012.  I re-read it and felt it was worthy of a second look.  I added some new media. Thank you all!  Best, Christine

I want to pull my hair back tight and smooth and make a big knot at the back I can feel… I want to have a kitty… I want to eat at a table with my own silver and I want candles.

The Cat In The Rain, Ernest Hemingway

I never take vacations. Seriously, never. (I do now! Didn’t then. C) But last Spring, I decided, when nursing my lame broken clavicle from a fall off my horse, that I needed to see Italy soon, before something else broke and I wasn’t able to stroll up all those hills to all those hill towns.

I’ve avoided Tuscany for years because I found it repetitive to hear everyone talking about Tuscany, like they’d single-handedly discovered the place.  But I succumbed when I saw a photo of the skyline of San Gimignano. It was romantic and lovely. I  booked the trip

So I was strolling in Rapallo, after the Tuscan portion of the trip, and what do I see but a sign, about one third obscured by shrubbery proclaiming that this was the hotel in which Hemingway wrote The Cat in the Rain.  I hadn’t gone looking for it—although I should have—but there it was. When I read the note displayed proudly in front of the hotel, I envisioned Hem and Hadley seeing that view, just as I was seeing it.

The days I was there were all gorgeous, sunny and warm with sparkling deep blue water. The day Hem wrote about was dank, gloomy, and stormy

I then had to run out to reread The Cat in the Rain, a short story I’d always liked.

You can read this story literally: a lonely wife seeking attention from her dullard husband and asking to retrieve and keep the cat stuck outside under the park bench, seeking sanctuary from the buckets of rain. Or you can go further. Analyses range from the sexual (Husband dry and desiccated; wife wanting the dripping kitty cat: need I say more?) to the psychological (wife who feels abandoned; husband/psuedo father figure who is withholding; cat as child figure) to the political (the Americans are unhappy while the Italians appreciate the nature outside and the sacrifices made during the war; the Italian concierge listens to the whining nameless American wife while her American husband just reads blindly. By the end of the story, wifey is known only as the American girl–no longer even the American wife. She’s been demoted further.)

I think the wife deserves a name–perhaps Kate. (And, by the way, do we know if the big tortoise cat brought to Kate by the kind Italian chambermaid is the cat under the bench getting drenched or a substitute cat?) 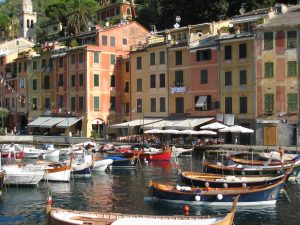 I didn’t expect to discuss The Cat in the Rain in this post but since seeing the plaque in Rapallo, I was drawn to it.  So what do you think? Do you love that story; hate it; is it clear to you what it’s about? I’m pretty literal and read it as the lonely, a bit childish wife, trying to get attention from her distracted husband and wanting something to nurture. I just read another analysis by a guy who thinks the wife is just a brat, end of analysis. But heck, that’s the fun of the short story. A lot is packed into a small package. Kind of like my beagle. (My beagle, Vilulah, has since passed away but I still have two large dogs ready to fill in for her. She was the best.)

P.S. See the link below. I just found this sacrilegious but hilarious take on Hem’s whole life. beware obscenities. If you can’t deal with that, please skip. it is laden with them. But still so funny. Really, it’s not to be missed if you love Hemingway.